A couple of weeks ago I mentioned that we were about to embark at long last on a foray into rearing our own queens.  Unfortunately the superb weather of April has been replaced by a somewhat more familiar icy blast and we had to delay our plans.  However this week it was decided that if we didn’t start now we never would and so today, armed with “Queen Rearing Simplified” we started on the great adventure. 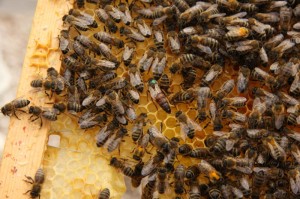 In attendance were John and Dianna Baillie, El Supremo himself  Tony Harris and yours truly.  We have Dianna to thank for the photographic record of events. 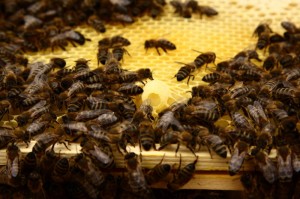 Today was stage one of the process and the first part of that was to find the queen from our chosen cell starter colony and confine her in a bottom brood box away from most of her brood.  The theory being that the brood hatches and all of those young bees are in prime condition, when we make them queenless, to feed our grafted larvae when we carry out stage two of the process in eight days time.  Well found her we did and into the queen clip she went.  Then we set about rearranging the colony.   A couple of charged queen cells were found and the decision was made to make up a couple of nucs using the queen cells and the excess brood from the top box of this double brood box colony.  John had very generously made and donated  some very beautifully crafted nuc boxes and a couple of these were pressed into service. 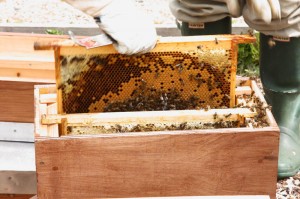 Brood for a nuc 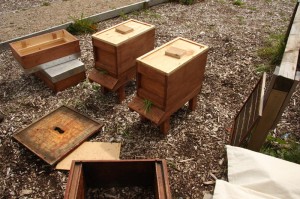 Nucs made up, entrances blocked 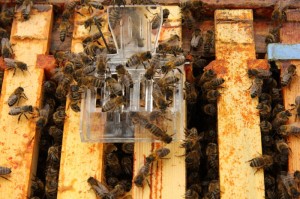 This is where the fun started.  Unknown to us Tony’s queen clip was bust and on lifting the manipulation cloth under which the clip had been placed her majesty was nowhere to be seen!  By which time the normally even tempered bees were quite understandably getting a bit concerned at the tearing apart and rearrangement of their home. 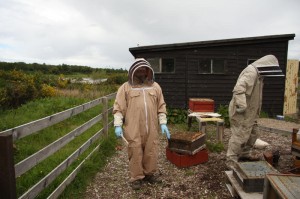 John in a cloud of bees!

There was nothing for it though and back through the box we had to go. Luckily we found her in reasonably short order and put her into the brood box where she’ll be staying for the next couple of weeks. 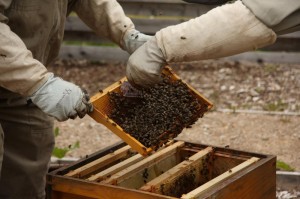 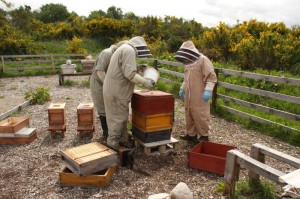 A gallon of feed to keep them happy!

Well that was pretty much it.  We reassembled the hive and off into the sunset we went.  Until next week when I make my first attempt at grafting larvae.  Stay tuned!