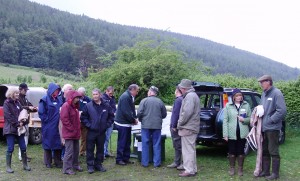 Saturday 18th June dawned bright and sunny and so we thought ‘hooray!’ just the day for our outing to Pluscarden Abbey. My joy was short-lived as by ten o’clock the dark clouds appeared and the weather slowly but surely deteriorated. 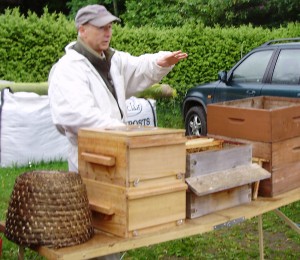 Off we set to arrive in good time only to find that the drizzle was even more determined to rain on our parade. Undeterred by the weather almost 40 beekeepers and prospective beekeepers appeared and it was the beginning of what turned out to be an excellent afternoon. 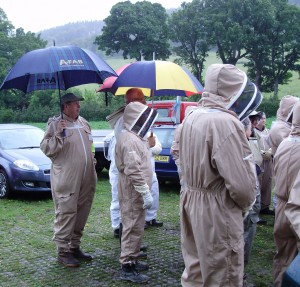 Beekeeping in the rain

The meeting was greeted by Tony Harris, our secretary, and then followed a demonstration by Rob Mackenzie. It had become clear that we had a lot of new folks in our midst and so the plan was that they should be split into three groups with a view to their, at least, being able to see into a hive or two. 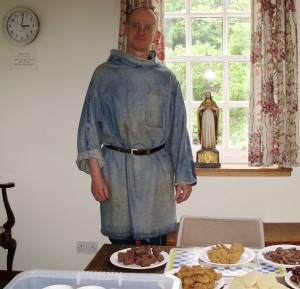 The groups were headed by Dr. Stephen Palmer, Tony Harris and Rob Mackenzie with two groups going to the new apiary at Pluscarden Abbey, St. Scholastica’s, to where some the hives have been moved and the other group going into the hives at the original site. 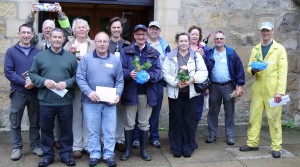 Those bees, at the old site, proved to be quite difficult and so the hives were closed quite quickly thus proving that it isn’t always a good idea to go into hives when the weather is inclement.

After the beekeeping business was finished with we all retired to the tea-room at the Abbey and a fine repast was had by all. The raffle, which was most ably organized by Angie Mackenzie was drawn and in all there were eleven prizes. We were joined by Father Benedict during the afternoon and also the Abbey cat – a jolly black and white person with a very short tail. 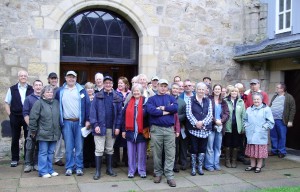 It was excellent that we had so many new beekeepers with us and Tony did a fine trade in selling various new or second hand beekeeping ‘goodies’.

Moray Beekeepers Association is in fine fettle and thrilled that all the work that our Association has put into promoting beekeeping and awareness in our area is growing so well. So you see, every cloud does have a silver lining, especially yesterday at our favourite site at Pluscarden Abbey where the wonderful peace and tranquillity (except for a few rather grumpy bees!) was there for the taking.