how many queens in a hive?

Last summer I found myself on the way to a house at Moss of Barmuckity where I was reliably informed there was an abandoned hive in the garden, still occupied by bees. Upon arrival I spoke to the owner, Jimmy, who told me his father had been an avid beekeeper but had now moved into a care home, and a swarm had moved into one of his old hives the previous summer. I told Jimmy I would have a look and then report back to him.

So I donned my beesuit, lit my smoker and made my way to the very back of the garden where sure enough was a rather old and battered beehive, 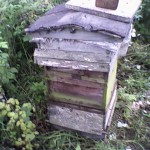 with honey bees coming and going from the entrance and they seemed happy enough.

I puffed a little smoke over the entrance, waited for a couple of minutes and removed the roof. My eyes fell onto an old straw skep and when I removed the box from around it I could see that the skep was occupied by bees and it was firmly stuck to the top bars of the hive. What should I do now? I pondered. 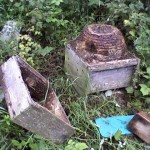 I gave them some more smoke and started trying to prise the skep upwards and after about 10 minutes it was free. I lifted it up to reveal the wild honeycomb the bees had built in the skep. 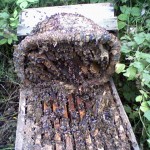 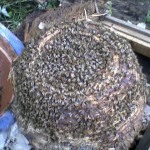 I removed the skep and then just about managed to go through the brood chamber although it wasn’t easy as the bees had built their own comb loosely around the frames that had been inside. The good news was that there were eggs, larvae and sealed brood present and the colony didn’t seem unduly affected by varroa. I couldn’t however find the queen! 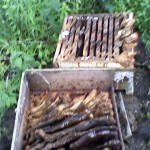 I re-assembled the hive, placed a queen excluder over the brood box and then placed the skep back on top followed by the roof. I would return in a couple of days time, transfer the bees into an empty hive before moving them to our training apiary at Birnie. As I was tidying up my attention was drawn to a lot of bees that were still on the board where I had placed the brood chamber and upon closer examination I saw to my dismay a recently dead queen laying there . The best laid plans hey! 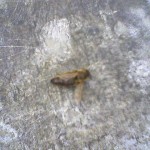 My option now was to let the bees make emergency queen cells and to return after 7 days just leaving 1 sealed cell from which hopefully a new queen would emerge, mate and begin laying.

So I did return a week later and when I opened up the hive there were no emergency queen cells. In fact, the bees seemed in quite a good mood and where busily bringing in pollen. And there were eggs present! What did this mean and what to do now? Well, there was obviously a queen present so I decided to split the colony, leaving half the bees in the old hive and placing the other half in a new hive. This task was made easier when I found the queen and she and her frame of brood and bees were removed into my new hive, along with 2 additional frames of brood, bees and a frame of stores. I sealed it up and took it to our training apiary where it still is, the bees having come through the winter successfully. The other hive managed to raise another queen and they too have successfully wintered in one of my own apiaries.

In trying to figure out what had happened in the hive, i.e. it appeared there were 2 queens in it, I found out that that this does happen now and again. Sometimes the bees will be replacing an aging queen and they will raise a new one. Mother and daughter will happily survive in the hive, often found laying on the same comb until the ‘old’ queen finally dies or is ‘seen off’ by the workers. This is known as ‘supersedure’. The other point is that there was a lot of space between the bottom brood chamber and the top skep in this hive and this sometimes leads to 2 queens surviving in the same hive. Good eh!

I will be re-visiting Jimmy in the summer to see whether a swarm has moved into the abandoned hive, and perhaps I will do it all over again. Jimmy was more than happy as he was compensated with with a couple of jars of local honey and some cut comb heather honey. YUM, YUM!