An exciting day for beginners

It seems that the first thing I say in most of these blog posts is usually something to do with the weather.  Being a beekeeper makes you very focused on it.  Everything revolves around it when it comes to bees.  And this year has been a year of extremes.  From the blast of winter we had at the apiary back in April to the extreme heat we had on Saturday 26th May when we welcomed a group of newcomers to one of our Introduction to Beekeeping courses.

The first thing that happened when we arrived was a swarm issued from one of the hives and set off into the neighbouring whins.  Everyone dived into their suits and off we went in pursuit.  I forgot the camera in the excitement so no pictures I’m afraid. We found the cluster in short order a few yards from the apiary and with a skep placed over them and a little smoke for encouragement they headed upwards into its dark interior.  The next step was to move the skep on to the ground on top of a white cloth and we left them alone to allow the rest of the bees to catch the scent from their fanning sisters.

Back at the apiary it was so hot (about 27C) that we decided to move the classroom session outside. 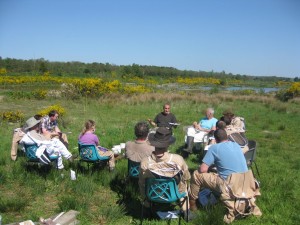 Everyone was given a quick but thorough grounding in all things bees and beekeeping which took us up to lunch time.  At which point another swarm decided to issue from another hive!

We left that to find a spot to make its cluster and went back to deal with the original swarm. Luckily the bees had taken up residence in the skep and so were collected and moved back to the apiary where a new hive had been set up to receive them.  In they went and all was well with them. 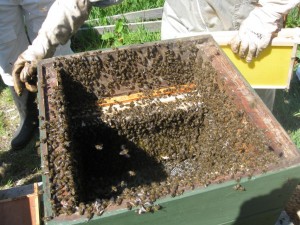 Swarm in the hive

The second swarm had likewise clustered not too far away if in not as convenient a spot. 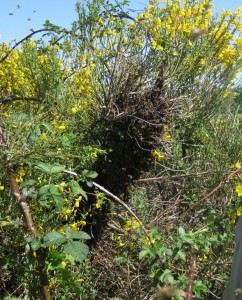 Swarm in the whins

The same technique was applied to this swarm but using my own bodged sawn-off wash basket skep instead of a posh shop-bought one! 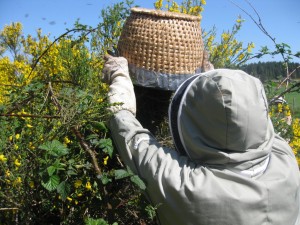 At last we were able to head off for a bite to eat and something cold to drink.

When we returned to collect the swarm it was clear that something different had occurred with this one.  For one thing the skep felt awfully light. 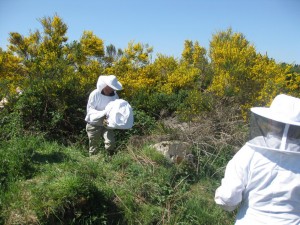 Not many bees in this

And this was borne out when the skep was emptied into a hive. 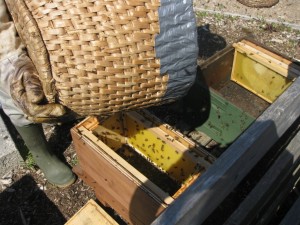 Where've they all gone?

The answer was that the hive that swarmed had a clipped queen and all the bees had flown home to it once they realised she hadn’t come with them.  Never mind, it was still a great beekeeping example to be able to show the beginners.

Onwards to the afternoon session which was spent going through the hives and giving everyone a good look at what goes on inside. 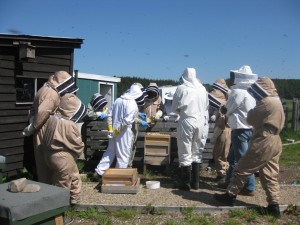 I’m sure everyone felt the heat to some extent during the afternoon and a few had to take a break in the shade of the portacabin.

So quite an eventful day for all concerned and we got to show some of the more unusual aspects of beekeeping.